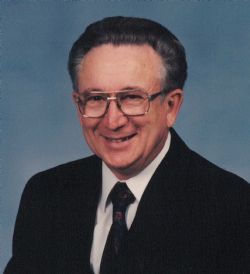 He was also preceded in death by a brother and sister-in-love, Dexter and Ione Gibson. Hubert is survived by his loving wife Evelyn Chambers McKeown. He is also survived by 2 children, Nickie (Jimmy) Owens and Bud (Nancy) McKeown all of Rock Springs. He has five grandchildren, Jaime (Ken) Hunter, Stacy Owens, Landon (Andra) Owens, Matt McKeown, and Andrew McKeown; and five great-grandchildren, Zoey and Kenzee Hunter and Peyton, Liam and Ivy Owens. He is also survived by numerous nieces, nephews, cousins, and friends.

Hubert attended public school and graduated from Drew Central High in 1952, graduated from Arkansas A&M College in 1956 with a Bachelor of Science in Industrial Education. He drove a Drew Central school bus while attending A&M. He received a Master of Science in Educational Administration from the University of Arkansas in Fayetteville in 1964. Hubert taught in public schools in Little Rock, Drew County, and Lincoln County and was the Director of Placement and Financial Aid and the Director of Admissions at Arkansas A&M / University of Arkansas at Monticello. He served as the Drew County School Supervisor for 17 years, retiring in 1992, with over 40 years in Education. Through the years many former students visited and thanked him for the positive impact he made on their lives.

Hubert was active in many community, county, state, and area organizations. He was a member of Rock Springs United Methodist Church where he served as Lay leader, Lay Delegate to the United Methodist annual conference for 50 years, treasurer, chair of the Finance Committee, and taught different Sunday school classes. He served on the Drew Central School Board for 10 years and was president of the Drew County Teachers Association. He was a Charter member of the Drew County Chamber of Commerce and a member of the Monticello Optimist Club, where he served as President for 2 terms. Hubert was very active in the Drew Country Fair for 53 years where he served in many different capacities. He was also active with the Arkansas Fair Managers Association for 10 years.

Hubert received an Honorable Discharge from the United States Army after 2 years of active service and 6 years in the reserves. He was a John Deere enthusiast and loved all things tractors. He often traveled with his good friend, Johnny Free, to numerous tractor shows. Sometimes they would return with yet another tractor and they always returned with stories to share. Hubert was a wonderful husband, father, and grandfather. He spent his retirement helping Evelyn with her gardens and keeping his grands and great-grands. He loved to travel and was able to take many trips throughout his life and his retirement.