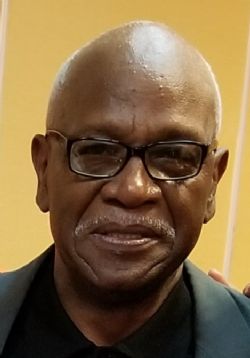 On December 27, 1952, Jimmy Ray Harris was born to George Harris Sr. and Marvastine Ridgell in Monticello, Arkansas. He was the eldest of three children born and raised in Monticello, Arkansas where he received his education. Jimmy attended Drew and Monticello High School and graduated in the Class of 1971. In high school he was a star basketball player. Jimmy enlisted in the USAF after graduating from high school. He was assigned to Bolling Air Force Base in Washington, D.C. During his Air Force career Jimmy was an exemplary airman along with being a stand-out basketball player on the base team, traveling around the country. If you know Jimmy, you know that he had no problem showcasing his pride and telling everyone he was the best player ever to play the game of basketball. Basketball was his favorite but Jimmy loved all sports and would attend all high school and college basketball, football and track events. After his enlistment contract with the Air Force, Jimmy returned to his beloved hometown of Monticello to take care of his grandmother. During that time, he enrolled in classes at the University of Arkansas at Monticello. Jimmy graduated with a Bachelor of Science in Business Administration. He subsequently received a coveted spot as a United States Army Commissioned Officer assignment to the Field Artillery Branch at Fort Sill, Oklahoma. He completed two tours of duty with the Air Force and Army with a total of over 10 years of active-duty service. At the time of his death Jimmy was a bus driver for Watson Chapel School, Pine Bluff, Arkansas. He loved driving the bus and his Toyota cars. He bragged about putting over 500K miles on his Toyota and keeping his cars well maintained like his women; so they would last a long time. Every day Jimmy would read the newspaper and discuss current events, politics and sports. He was a social butterfly and party animal. No one could out-talk Jimmy. He got loud, emotional and had to have his way and last word at any cost. While assigned to Bolling AFB, Jimmy met and married Sheree Washington and the union was blessed with two boys: Jamie and Jason Harris. Jimmy is preceded in death by both of his parents, George Harris Sr. and Marvastine August (Ridgell). He leaves to cherish his memories his life partner of more than 40 years, Rose Jordan; two sons Jamie Harris (Adrienne) (San Francisco, CA) and Jason Harris (Kathleen) (Aurora, CO); three grandchildren Sage Martin Harris and Shaheed Martin Harris (San Francisco, CA) and Alena Harris (Aurora, CO); one adopted daughter and grandson, Keisha Ridgell and her son ''June Bug'' (Conway, AR); five sisters Maryland Johnson (Inglewood, CA), Anna August (Chicago, IL), Yvette Harris (Detroit, M)I, Karen Harris Holloway (Dexter) (Detroit, MI), Jacqueline Harris Cary (Carl) (Detroit, MI); one brother George Harris, Jr., (Detroit,MI); one special aunt who Jimmy upgraded his relationship to a sister Mary Ann Hudspeth (John) (Bristow, VA); Eleanor Ridgell (Monticello, AR) and a host of nieces, nephews, cousins, other relatives and friends. Jimmy mentored and coached so many around Southeast Arkansas that there's not enough space to name everyone. If he was your cousin, Jimmy wanted to be called Uncle JImmy and he took special care of all his family and adopted nieces and nephews. Jimmy was a pilar in his family. To God be the glory!

So do not fear, for I am with you; do not be dismayed, for I am your God. I will strengthen you and help you; I will uphold you with my righteous right hand...Isaiah 41:10