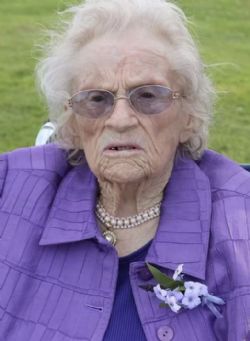 Dorothy Brewster Davis, age 104 passed away peacefully on Monday, June 20, 2022, at her home in Monticello, AR surrounded by her family. She was born July 6, 1917, in Warren, AR to the late Robert A. Brewster and Lonnie Pearl Bradley Brewster. Dorothy was a homemaker and housewife who enjoyed working on the farm where she raised cattle even having a set of twin calves once. She loved to work in her garden, play cards (especially Skip-Bo) and she was an excellent cook, most well known by her family for her pot roast and fried pies. She was the oldest living member of Harmony Freewill Baptist Church in Rye, AR.

In addition to her parents she was also preceded in death by her husband, Doyle ''Red'' Davis whom she married on June 25, 1939; daughters, Ann Willingham and Vicky Smith; sons-in-law, James Britton, Hugh Charles Smith and Robert Willingham; sisters, Opal Hobbs and Rene Holbrooks; and a brother, L.A. ''Buddy'' Brewster.