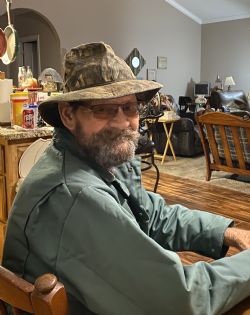 Ben Lasiter, age 78 of Wilmar, Arkansas passed away Wednesday, June 22, 2022, enjoying his last ride on a favorite pass time - riding his four-wheeler around the front field. He was born June 17, 1944, in Wilmar, Arkansas to the late Howard Benjamin and Mary Johns Lasiter.
He was a retired heavy equipment operator and was of the Baptist faith. He was a member of the International Union of Operating Engineers, Local 624. He was also preceded in death by his wife of 55 years whom he married on July 14, 1964, and remained by her side until her last breath, Peggy Calhoun Lasiter; one son, Dewayne Lasiter; and two brothers, Marvin and Charles Lasiter.
Ben's expertise as a pipeline side-boom operator was unmatched. The challenges of working in extreme temperatures and conditions were normal for Ben. He encountered these conditions as he worked on the slopes of Prudhoe Bay, Alaska on the Trans-Alaska Pipeline System during the 70's, as well as the pipeline across the United States. These abilities he possessed always enabled him to provide for his family. He was proud of his homeplace on Green Hill New Hope Road where he raised his four kids. On this homeplace, Ben loved his garden, raising cattle, cutting hay, and training catahoulia dogs. He also had a few goats and rabbits. Other hobbies of his included hog and squirrel hunting and feeding his fish where he trained them to come to the sound of his four-wheeler.
Back in the day, men were taught to be strong, stoical, not to express vulnerability, encouraged to express pain without complaining, be in control, self-reliant, handle any situation and to overcome any challenge without fear. Dad lived those words until his last breath. If you would ask him how he was doing or feeling, his answer lately would be, ''I'm not doing 100[%] but I am good!''
Survivors include one daughter, Tina Lasiter Hillyard of Fayetteville; two sons, Dusty Lasiter of Wilmar, Michael Joe & Shawn Lasiter of Monticello; two sisters, Linda Derryberry (Tommy); Irma James (Alvin), one brother, Tim Lasiter (Teacy), five grandchildren Dewayne Norrell, Nikolas Hillyard, Dustin Lasiter, Madison Lasiter, and Noah Hillyard; and seven great grandchildren, Cecily, Tandyn, Kyler, Bentley, Adalay, Jaxx, and Axel.
Funeral service will be 10:00 a.m. Monday, June 27, 2022, at Stephenson-Dearman Funeral Chapel. Burial will be in Andrews Chapel Cemetery. There will be a visitation Sunday evening from 6:00-8:00 p.m. at the funeral home. You can sign Ben's guestbook page at www.stephensondearman.com.