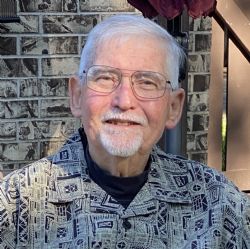 Our loving husband and father Timothy Walton Beckham entered into God's Kingdom on October 31 surrounded by his family, after a difficult battle with cancer.
Tim was born to Rosa and Robert Beckham on November 5, 1939, in Jacksonville, Florida, and he grew up in Coral Gables, Florida. After serving in the US Air Force, Tim attended Florida State University on the GI Bill, graduating with a degree in Business Administration in 1968. He was inducted into Delta Sigma Pi business fraternity. It was at Florida State that he met his beloved wife of 53 years, Betty Ann. They went on to have three children, Teresa, Richard, and Ruth. Tim worked as Human Resource Manager and Labor Relations Manager for Burlington Industries for thirty-three years, which eventually brought him to Monticello, Arkansas, twenty-five years ago. After his retirement from Burlington Industries in 2001, Tim and Betty Ann had time together to fish and travel around the country visiting family in their RV. He and Betty Ann worked together to establish and grow their computer consulting business, Beckham Squared, LLC. Tim was an active member of Rotary International for much of his life. He was an ardent supporter of the Monticello-Drew Chamber of Commerce. He served as a Chamber Board Member. Tim and Betty Ann were members of St. Mark Catholic Church.
His love for his wife, children, and grandchildren motivated his every action. Although his loss is mourned, his life and his reunion with the Lord are causes for celebration and joy.
Tim was preceded in death by his daughter Ruth. He is survived by his dearest wife, Betty Ann, his children Teresa (Marshall) and Richard (Jingyi), his grandchildren, Caroline, William, and Joshua, and his sister, Bobbie Ann Shomaker. Services will be held at St. Mark Catholic Church in Monticello, Arkansas on November 4 at three o'clock.
Print Obituary
Service
Funeral Services
Friday, November 4, 2022
at 3:00 p.m.
St. Mark's Catholic Church
1016 N. Hyatt
Monticello, AR  71655
Map & Directions