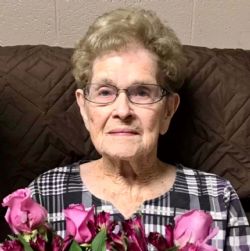 Lois Trantham Sanson Conrad, age 93 of Bastrop, LA, formerly of Monticello, AR, went to be with the Lord and Savior Tuesday, December 28, 2021, at Lagniappe Nursing and Rehab in Bastrop, LA. She was born January 22, 1928, in Drew County, AR to the late Joe Trantham and Elsie Dodson Trantham.
Lois loved her family more than anything else in his world. She also loved crafting, crocheting, working in her puzzle books and gardening. Lois loved getting cards in the mail and she loved pictures of her family.
She started working at the age of 15 at Burlington Industries and continued to work there until she retired. Lois then started another career working at Drew Memorial Hospital as an aid in the nursery. She loved on and rocked numerous babies in the 26 plus years. She loved on those babies just like there were her own. She worked the night shift 11 pm until 7 am and then would go to work part-time at the nursing home. Lois wasn't the kind of woman to just sit around so decided began another new adventure. She opened a craft store, Craft Collections which she continued until 2007. In 2008 she moved to Bastrop, LA where she continued to live until the Lord called her home.
In addition to her parents, she was also preceded in death by two husbands; the father of her children, Hubert Sanson and her late husband, Jack Conrad; two grandsons, Dale Dewayne Allen and Michael Allen; two brothers, Joe Trantham and Wade Trantham; and one sister, Josephine Donaldson.
Lois is survived by one son, Jerry Sanson and his wife Nancy of Monticello; four daughters, Judy Slaughter and her husband, Lawrence of Pine Bluff; Barbara Martin of Rockport, Texas; Deana Papetti and husband, Bill of Jacksonville; and Kimberly Hawkins and husband, Michael of Bastrop, LA; her grandchildren, Mark Conrad and Connie, April Wasson and Marc, Tracy Allen and Pam, Tim Sanson and Rashan, Tina Hough and Randy, Chris Johnson and Michelle, Emily McManus and Dale, Dakota Hawkins and Erica, and Micah Hawkins and Virginia; numerous great grandchildren and great-great grandchildren whom she loved and adored; along with her beloved poodle, Charm. The family would like to issue a special thanks to Oak Woods Nursing home, Lagniappe Health Care and Premier Hospice in Bastrop, LA for the care they gave Lois.
Funeral service will be 2:00 p.m. Sunday, January 2, 2022, at Stephenson-Dearman Funeral Chapel with Brother Allan Eppinette officiating. Burial will be in Gaster Hill Cemetery in Monticello. There will be a visitation Saturday evening at the funeral home from 5:00-7:00 p.m. You can sign Mrs. Lois' guestbook page at www.stephensondearman.com.