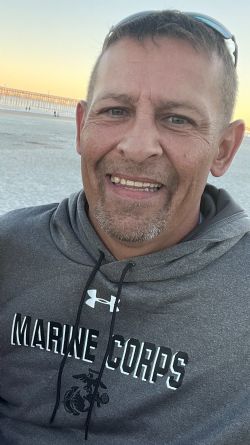 When Kevin Robert Thomas was born on February 13, 1977, the world became a better, brighter place. He went to sleep and left this world on July 17, 2022.
Kevin loved sports and played baseball, basketball, and football all through school. He graduated from McClellan High School in 1995 and attended UCA. He joined the USMC in 2005 and did a tour of duty in Iraq. He was proud to be a Marine and loved his country.
Kevin is survived by his wife Paula Howard Thomas; his two children Joely and Caden Thomas and their mother Joni. His ''babies'' (who are now 18 and 16) were the light of his life and his daily heartbeat. He will be forever cherished by his mother and father Bobby and Joy, brother Seth, nieces Alex Thomas and Lexy Howard, mother-in-law Jewel Brixie; aunts and uncles: Fred and Shirley Woodall, Judy and John Tolliver, Butch Atkinson, Debbie and Jeff Newkirk, Darin Thomas (Paula), sister and brother-in-law, Adam and Jewellee Mellor, nephews Colton and Wyatt and a host of cousins, friends and Marine Corps brothers. A special thank you goes to his neighbor Richard Light and Sgt. Major Henry Moore.
Kevin was preceded in death by his grandparents, Herman and Nell Thomas, C. O. Woodall, Vivian Pollard and aunts Dianna Atkinson and Kristen Thomas. We know they were in heaven waiting on him with open arms.
The only comfort we get from his passing to his eternal rest is to know his struggles are over, his addiction is cured. He has been healed.
A visitation with the family will be at 10:00 a.m. in the church parlor with a memorial service to follow at 11:00 a.m. in the Sanctuary at Westover Hills Presbyterian Church, 6400 Richard B. Hardie Drive, Little Rock 72207 on August 2, 2022. Burial with military honors will be at 1:00 p.m. after the memorial service in the Arkansas State Veterans Cemetery; 1501 W. Maryland Avenue North Little Rock, AR 72120.
In lieu of flowers the family is requesting memorials to Sheep Dog Impact Assistance Attn: Warrior PATHH Program 1200 W Walnut Street, Suite 2310, Rogers, AR 72756; John 3:16 Ministries, 75 Holmes Road, Charlotte, Arkansas 72522, or a rehab facility of your choice.
You can sign Kevin's guestbook page at www.stephensondearman.com.