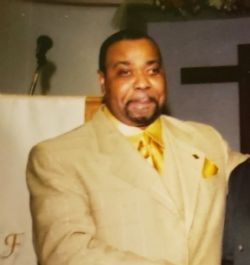 Mark Banks was born on October 3, 1958 to Wydell Tillman and Rev. Sam Banks in Yancopin, Arkansas. He departed this earthly life on Saturday, November 20, 2021. He was preceded in death by his parents, two sisters; Velma and Kimberly Tillman, one son; Chad Moore and his wife; Barbara Sue Banks.

Mark attended McGehee Public School in McGehee, Arkansas. While attending, he excelled in track and football. He graduated in 1977.

Mark confessed in Christ at and united with McGehee Chapel Missionary Baptist Church. He later united with Trinity' Full Gospel in Monticello, Arkansas and served as an ordained Deacon.

Mark and Barbara Sue were united in Holy Matrimony on Saturday, July 28, 1999.

Mark enjoyed sporting events, family gatherings, getting together with friends, and most of all spending time with his children and grandchildren.