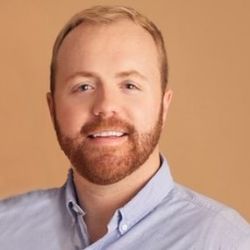 William Jeffrey Busby, 35, of Monticello, Ark., tragically passed away on November 20, 2021, while working on his family's deer camp. He was born on November 8, 1986, in Fort Smith, Ark., to Bill Busby and the late Roselyn Grubbs Busby. William had many loves in his life, from serving Southeast Arkansas families through Edward Jones Investments and hunting with friends to cheering on the Razorbacks. Most of all, he loved being part of a large and loving family, the foundation of which was his love for his wife, Katelyn Busby, whom he married on September 28, 2013. After four years of marriage, William and Katelyn welcomed their first child, William Henry, and two years later, Clara Rose. Of all the roles William played, that of Henry and Clara's father was his most cherished. Gentle, loving, and kind, William's unconditional and unwavering love for his children will be everlasting.
William is survived by his wife, Katelyn Busby, of Monticello; his children, William Henry, 4, and Clara, 2; his father, Bill Busby of Monticello; his sister, Kelli Chandler (Colin) of Dripping Springs, Tex.; as well as a host of other family, including nieces and nephews who loved their Uncle William. William's family and friends loved him deeply for the traits that defined him. He was quiet and discerning, dependable and loving, and quick to both celebrate and commiserate. He was a joy to be with and a constant source of strength. He will be greatly missed.